What's your wpm (words per minute)?

What's your wpm (words per minute)? 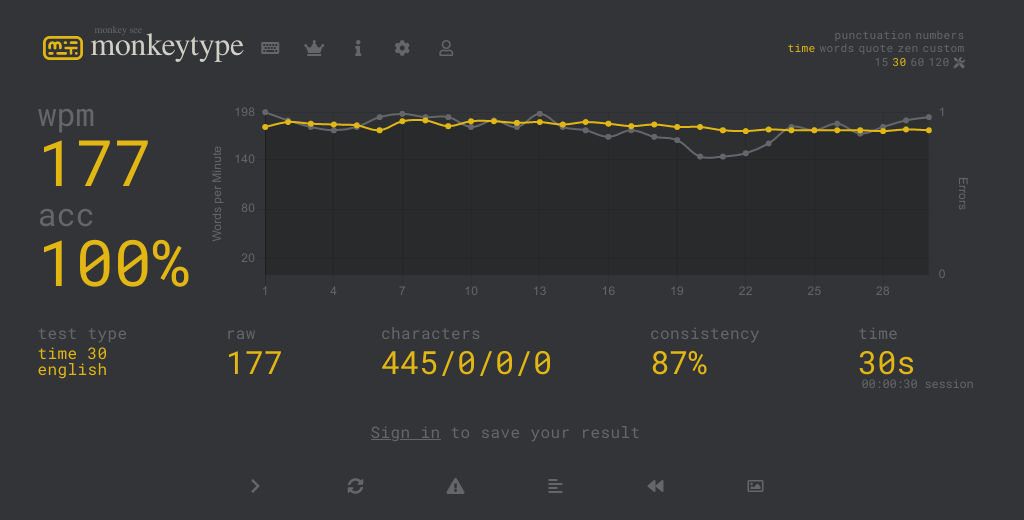 Haha, not sure. Parents made me join touch typing classes when I was 7 or 8 and since then there’s rarely been a day where I haven’t spent multiple hours behind a keyboard/pc. Azerty layout FWIW

Doing these tests made me realise how one is limited by the keyboard itself. Although so far the best result in this thread was on an azerty keyboard, I find them absolutely cancer and it’s really just France that uses them (despite other countries having accents on their letters or speaking French).

“default” keyboards were made for typewriters, and so the character disposition was made so that typewriter inputs wouldn’t get tangled up when typing fast. There is no reason to keep this layout on computers, except that people were already used to their typewriting layout.

I think qwerty is among the best for programming, because you have everything at the ready. There’s also a very real problem that qwerty users don’t have, is ctrl+z and ctrl+y (probably the most used shortcut). On azerty or qwertz keyboards, the Z is all the way out from the ctrl key. This makes you stretch your hand and not at all what the designers of this shortcut envisioned, which was to have your undo, which you obviously do before a redo, next to ctrl for ease of use. The shortcuts should be modified for other layouts. I would honestly switch to qwerty if I didn’t have to use accents because it’s just more comfortable.

But there’s other mechanical things at play. My keyboard is kinda older, and the key depth is actually incredibly bad (despite it still working 100% 7 years later). It makes a lot of noise and you have to press keys way too far down. Not helpful when you have to type a letter twice in a row – I actually just noticed that in the test.

I’ve heard of dvorak and other layouts but i think I and everyone else is too used to their layout to learn something else now. It would also need to prove it has actual benefits. I think the more important part is to make comfortable keyboards. Do you know how difficult it is to actually find a keyboard? Most people might just get whichever they find, and that’s bad. You need a wrist rest for extended use (the reason I’m reluctant to change my keyboard is because the wrist rest is so amazing, I can use it to write stories down for hours without issue), you need RGB lightning to work in low light environments (and it’s definitely not a luxury anymore in 2021), you need a keyboard that will last and not make a ton of noise every time you press a key down. I am not going to pay 100$ for a keyboard and have it break down after 2 years lol. Media keys are not necessary but I use them all the time and I’m going to guess many people do when they have them. Yet when you look for keyboards, they’re just kinda thrown in there in a list and you’re left to figure them out yourself. And you can tell me you use cherry mx brown switches and I have no idea what that means unless I’ve had them in the past. Just give me comparisons like how much sound does a key press make, how deep the key goes, etc.

I also wonder about those “ergonomic” microsoft keyboards and if they really work:

If you look at how your hands are resting on a keyboard, they are actually pointing inwards. It’s actually uncomfortable to make your hands point straight up. But knowing microsoft, i honestly don’t think it’s that great a product lol.

Yes I was recently in the market for a new keyboard. 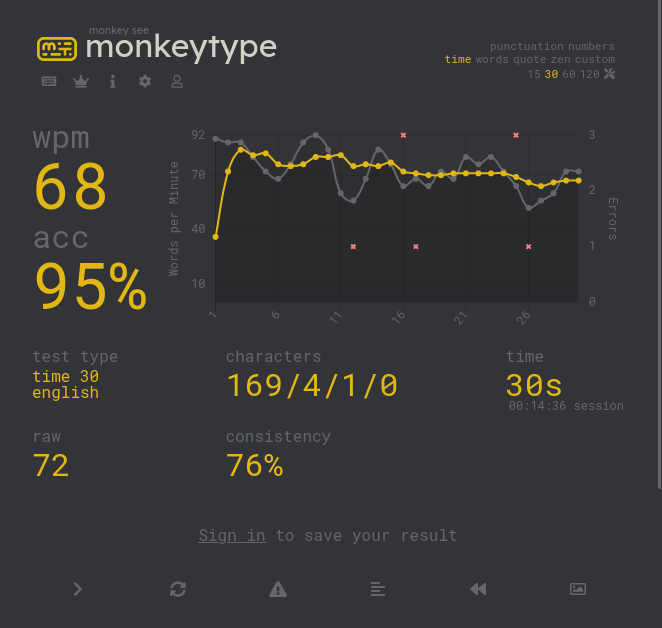 I get around 60 on monkeytype.com. More than enough.

Current personal best is 134 wpm on typeracer.com, average is just above 100.

This is right where I’m at

Monkeytype’s telling me I’m at 77wpm with 97% accuracy. I don’t really believe that. I might be at 45wpm.

80 with 97% accuracy. When I was in high school I was in the low 100s, wonder if its age slowing me down, or not typing as much combined with carpel tunnel

About 50 after 6 months or so on a new keyboard layout.

Ya just keyboard. Did dvorak for about 3 years, got up to 50 with that, now I’m on halmak.

heh, never heard about this

do you feel that it’s actually that much more efficient (like their gh page says) than, say dvorak, or it is hard/too early to tell?

it promises much better energy efficiency than dvorak and much better same hand usage statistics, which sounds very cool, but as very often with custom, especially new, layouts, it has very good theoretical performance, but in real life usage it turns out that there’s some previously unforeseen flaw deal breaker

the author says they learned the layout themselves, but doesn’t say whether he knew any other layout other than qwerty…

do you feel that it’s actually that much more efficient (like their gh page says) than, say dvorak, or it is hard/too early to tell?

Hard to say… I’m fairly sold on it because it uses both real world hand distance measurements, and a genetic algorithm to not only find the best keyboard layout possible, but to score existing ones. Its def more comfortable than dvorak or qwerty, but I also haven’t tried colemak-dh or some of the other ones ppl like a lot.

The main thing I’ve learned is that while these alternate layouts don’t make you type faster, they do make things more comfortable.

@dessalines @k_o_t on dvorak when i do super easy texts i can get up to 120 wpm!
but when there is hard writing, i go down to like 60 lol.
less than 1 percent of people can do this

btw do you measure this typing random words or quotes? this can have a large effect of difficulty fluctuation, at least in my experience…

Very impressive. How do you practice?

Can be physical without being “exotic” (changing languages, for example) :)

considering I don’t know proper touch typing and have my weird typing, hitting 64wpm is really nice for me