Hello, Whats THE stupidest thing you have seen on the internet?

Hello, Whats THE stupidest thing you have seen on the internet?

Seen quite a bunch on Yahoo Answers back in the days… 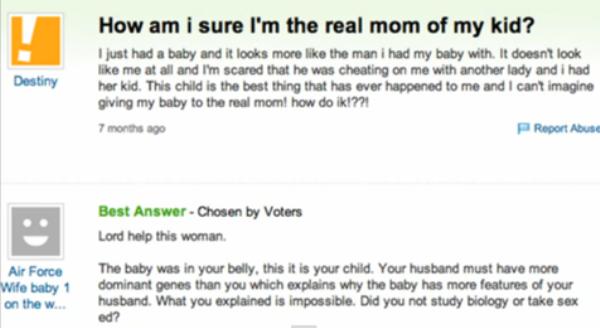 I was a regular lurker there since the start and it just blew my mind seeing how Trump supporters would automatically give him the benefit of the doubt on all the absurd things he’s said over the years. If he changed his stance, his supporters would immediately change their view to suit his narrative even if it directly contradicted what they’d said even 24 hours earlier. I’d RES tag users with their various positions on Trump issues and casually track their hypocrisy evolving.

I’ll give an example…

When Trump said he believed Barack Obama and Hillary Clinton directly founded ISIS, he was criticized for the ridiculous assertion. Naturally, his people on /r/asktrumpsupporters pushed the narrative that obviously Trump didn’t mean Obama/Clinton “directly” founded ISIS and that clearly he was implying that their policies and decision-making is what gave rise to the formation of ISIS.

A couple days later, Trump was interviewed by some right-wing talking head who gave him a clear out-- he asked him something along the lines of “so you don’t really believe Obama/Clinton literally founded ISIS, right?” and Trump just doubled down, to the host’s obvious dismay. Trump was too stupid to recognize he was being offered an out to save himself from looking stupider than he already is.

Meanwhile on /r/asktrumpsupporters, suddenly many of the very same users who previously said Trump didn’t mean Obama/Clinton literally founded ISIS had changed their tune and said obviously he meant what he said-- that Obama/Clinton directly founded ISIS. This obviously was met with all kinds of ridicule.

Days later, Trump was again asked about it and flip/flopped a second time. He claimed that clearly he didn’t mean Obama/Clinton had directly founded ISIS and acted as if it was so obvious that his original statement wasn’t meant to be taken literally, and that he was just implying that Obama/Clinton’s decision-making/policies are what gave rise to the formation of ISIS.

Of course, his supporters again flipped their script and parroted what Trump said. The very same users who had flipped, now flopped. Anyone who hyperlinked these rubes’ hypocritical comments from just days earlier was either banned temporarily, permanently, or their comments were just quietly removed.

Around that time was when the rules of the sub started to change. New users had to add a flair to their usernames indicating whether or not they were Trump supporters, which effectively poisoned the well of any reasonable discussion because if they identified as a non-Trump supporter, none of what they said mattered and often if their comments were especially effective at pointing out hypocrisy, they were banned or their comments were just removed.

I’ve seen a lot of ridiculous shit on the internet, but I swear even incels and other dregs of the internet have far more argumentative consistency than Trump supporters. To see this constant flip flopping to match Trump’s constantly shifting narrative was just pathetic to observe. There were numerous times when Trump supporters were baited by non-Trump supporters who posted quotes from prominent Democrats and opponents of Trump, but intentionally claimed they were Trump quotes and damn near every time, his supporters on that subreddit would eat the words up like candy until one of their sharper members realized they were being mocked.

I’m sure there’s gotta be some stupider things on the internet that I’ve seen. As a research scientist, that subreddit and similar right-wing discussion echo chambers were eye-opening and quite disheartening. No amount of scientific data or testimony from relevant experts will change these peoples’ minds and qualifications simply do not matter to them unless said qualifications come from someone who agrees with their narrative, regardless of how irrelevant those qualifications are. Jordan Peterson is a prime example of that.

I love how such a specific thing stuck in your head for so long haha, thanks for sharing.

At least incels are more or less ideologically consistent. The Trump loyalists - the ones who would do intellectual backflips to justify every word out of his mouth - followed the man himself. He has few solid opinions. I think the most consistent theme I’ve heard is that he’s been wronged (or his supporters have been wronged) and it’s time to take back the country. All other policy matters are up for revision, sometimes within the same sentence.

Barack Obama and Hillary Clinton indeed did fund and even create Isis. This is a undisputed fact.

Jordan Peterson is smarter than you will ever be.

Thanks for the laugh

Any time I look at my old posts.

In all seriousness, for me it has to be when I saw that the Governor of Missouri is trying to get that journalist arrested that pressed F12 on a government site and saw that it revealed 100’s of thousands of workers Social Security numbers and he reported it to the website. The Missouri Governor is accusing him of hacking on the basis that he had to do “multiple steps” to get to the information.

I am still seething.

Edit 2: This is still an active legal situation for anyone wondering or wanting to offer support.

My still existing youtube channel from when I was 12. Lost access to that email address and account many, many years ago and the videos are still out there

I honestly can’t say the stupid things that I have seen are endless.

Nah, it was the amount of plastic in that draw

It might be the things I’ve seen on 4chan back in the day. I remember right after that ISIS terrorist attack in Paris I saw a thread where someone shared they were thinking about strapping a bunch of fireworks to their chest, going to the candle vigil, tearing open their coat and yelling “allahu ackbar” as a prank. Later on I heard in the news about someone doing that exact thing. I found an article about it.

Bolsonaro and his crew here in Brazil.

Trust me, if you guys think Trump is stupid, you need to see what this guy’s doing to himself and the country.

Why are people acting wastefully on the internet? All of you’ll die soon, sometime… Stupid, stupid, and stupid.

Is there something you’d rather I do while I take a hot steamy shit? No? Then quit your complaining, probable bot, Lemmy it is.

This is the dick of any mod or admin who only ask for sources from users they don’t agree with. And then bans them.

YOU ARE ALL BRAIN WASHED F@GGOTS

Probably when people post that their second run in with covid would have been worse if they didn’t have their three useless vaccines.