I really hate NATO. Bc at the end it’s just keep buying weapons to the UEA and spen even more money on the military. I agree with this, but tbh the other side sucks the same. Both sides are just a bunch of imperialistic pigs. ¿Why side with one or another if they both suck?

(talking about the general scene, not about ukrania. Poor ukranian people tbh, they are the most damaged ones.)

I see you lurking fucks downvoting without any brain whatsoever. Cowardly slime

I qm not lurking but I did downvotes

You’re such a nasty racist.

I’ll be here to shoot down every thing you post from now on shill:)

Excuse me that is against the reddiquite

opinion useless, maybe you should stick to downvoting, commenting like this just spews your racist hatred

I’ve lived in EU for over 5 years

Your opinion is immediately invalid.

I guess I’ll go with political humor next time

This conflict goes back much further than last month and NATO expansion is absolutely a key cause of this war. Being sarcastic about it doesn’t change that.

The NATO is a defense agreement. Of course, Russia won’t be a fan of everyone else forming an alliance, but they wouldn’t need to care either, if they don’t plan to invade anyone.
And their immediate neighbors certainly wouldn’t either be joining a defense agreement with foreign forces rather than with Russia, if they felt like they could trust Russia, let alone need defense against Russia.

Ah yes it’s just an innocent defensive alliance that has been relentlessly expanding and invading countries for the past 30 years.

“if I kill all of my enemies, its basically defence”

I responded to this in another comment but simply put: NATO isn’t a defensive alliance and it never was. That’s a paper-thin lie that isn’t supported by their history whatsoever. If NATO were to expand to Ukraine, they would threaten Russia militarily, if not outright coup them.

Ukraine is a nazi-influenced country, of course it would be scared of russia. Russia, with its many faults, still fucking hates nazis. NATO is also not a defense alliance, it is an imperialist alliance made to kill communism, and expand the power of its leader, the United States.

Russia, with its many faults, still fucking hates nazis.

If that’s true, why are they in so many ways nazis themselves? Some Sun Tzu thing perhaps? “To know your enemy, you must become your enemy.”

name one nazi battalion in russia with police authority. One. Name a single openly nazi official in the entirety of the russian parliament. Can you even properly spout your own propaganda?

name one nazi battalion in russia with police authority.

Why did you have to specify “with police authority”? Did you invent that specifically so that I couldn’t say “Wagner Group”?

Nazism is 100% illegal in russia. Meanwhile, not only is nazism 100% legal in Ukraine (and the US), the current Ukrainian government upholds them: 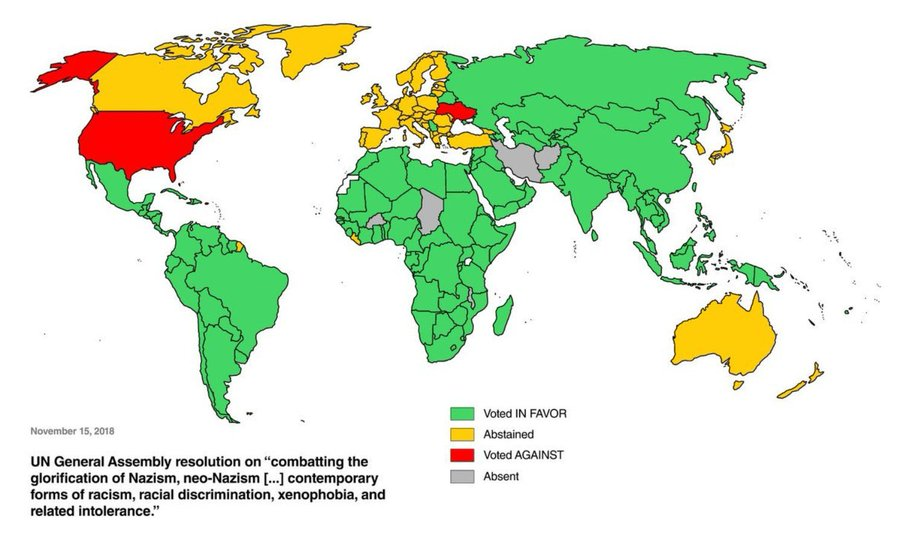 Wow, that’s weird. Was that politically motivated or what? I see the resolution was adapted on 2014-12-18, so some time after Russia illegally annexed Crimea from Ukraine.

They repeatedly do this vote, and ukrain always votes to support nazism. here’s another vote taken in 2020: https://digitallibrary.un.org/record/3894841?ln=en

There’s gotta be a reason why countries like Germany or Sweden, or practically all of the western world abstain from voting on this.

well, the west always has used fascists as a weapon whenever the going gets tough

You say that as if west is the only one who does that.

Us communists only kill them. can you provide examples to support your statement?

Oh, I don’t doubt that communists are anti-fascist. But I doubt that there are fascists, and those who use fascists for their own gain, only in the west.

It’s a couple of things. It was politically motivated in the case of Ukraine’s vote (it was submitted by Russia) and the US has an intense dedication to freedom of speech that is almost unparalleled.

No, because the Nazi Battalions in ukraine have police authority. Thats why its been hell for ethnic russians. the Wagner group is despicable, but are not a concrete organization. It is more of a broad name about different mercs and some groups that could be hired.

Oh you mean a fictional made up group? https://foreignpolicy.com/2021/07/06/what-is-wagner-group-russia-mercenaries-military-contractor/

If you read that article, nowhere it says it’s fictional. It’s the informal name given to a loose group of organizations. You really want to push some narrative here.

If you read the article then it’s pretty clear that there is no such group, and nowhere does the article claim that there are any nazi groups in Russian military. All the article says that Russia has mercenary groups and black ops. Pretty much all the allegations are pure speculation without any hard evidence. Sounds like you’re the one who’s determined to push a narrative here.

You know who else does protection agreements? The mafia.

Uh yeah because that’s what NATO does. It’s not a defensive alliance and it never was, just look at what happened to Yugoslavia and Libya. NATO is a clear and present danger to every country that opposes the west and if they expanded to Ukraine, they would be able to install military bases right next door to Russia’s capital. And they would undoubtedly use them.

Also, Ukraine was coup’d in 2014 by the US so it’s very debatable how much of the people’s will is represented by the decisions of their government. Especially considering Ukraine has since been in a civil war between those who refuse to recognize the puppet government and those who support it.

And if we’re talking about respecting sovereignty, then Ukraine should have followed the Minsk protocols. To Russia’s credit, they tried resolving this conflict diplomatically for 8 years. If Russia was half as war-loving as the US, they wouldn’t have negotiated their problems at all & would’ve sent their troops in years ago.

And what does Zelensky being Jewish have to do with anything? You realize Israel exists, right? Do you also believe that the USA ended anti-black racism because Obama was president too?

What the fuck was Libya? Yugoslavia? NATO is an alliance of anglo scum and any real leftist that isn’t an idiotic neoliberal shitcake worth their salt would not take their side. My god people like this are truly the lowest of scum. Don’t try to reply, I won’t make an effort to continue talking to idiots. 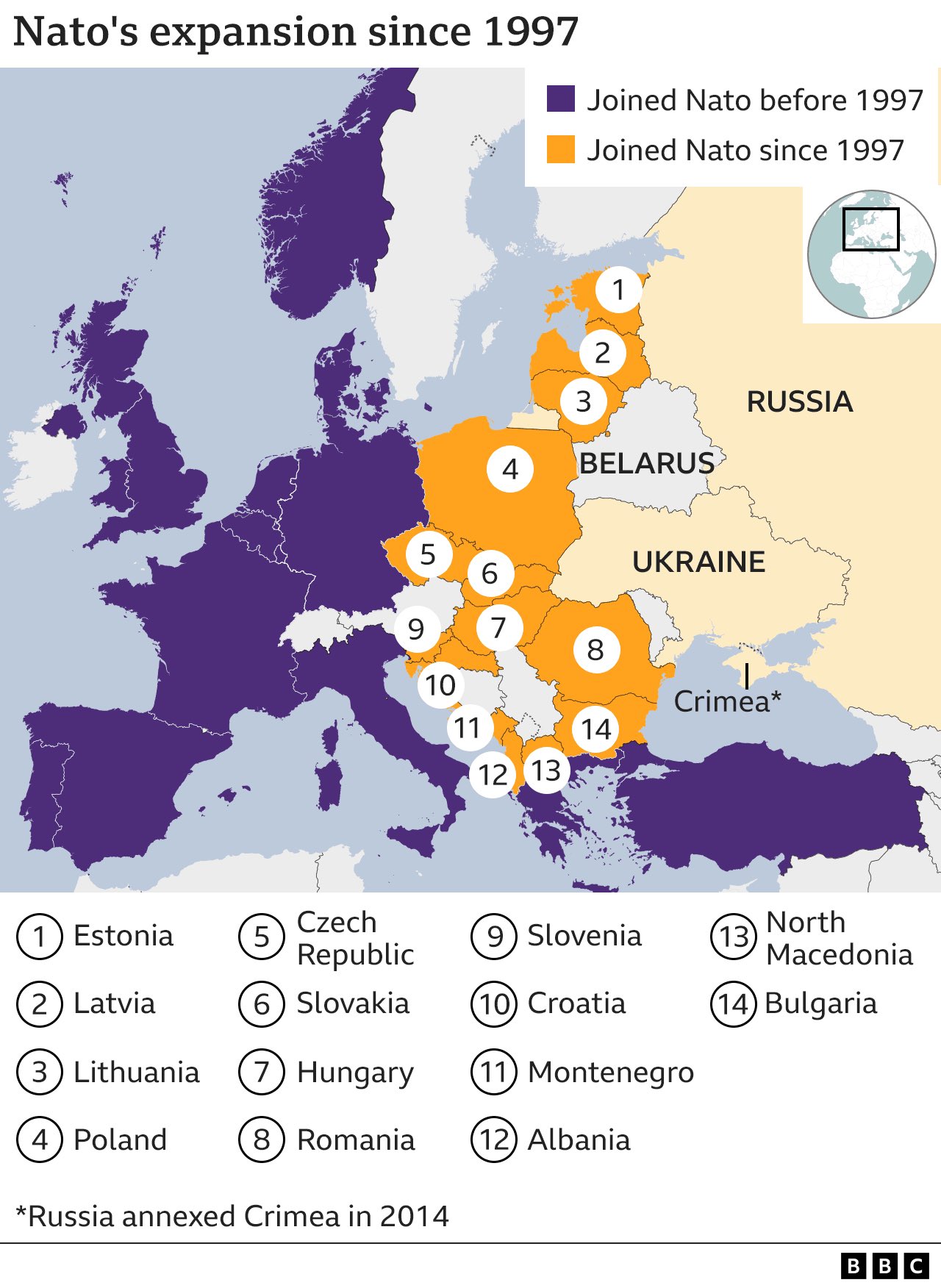 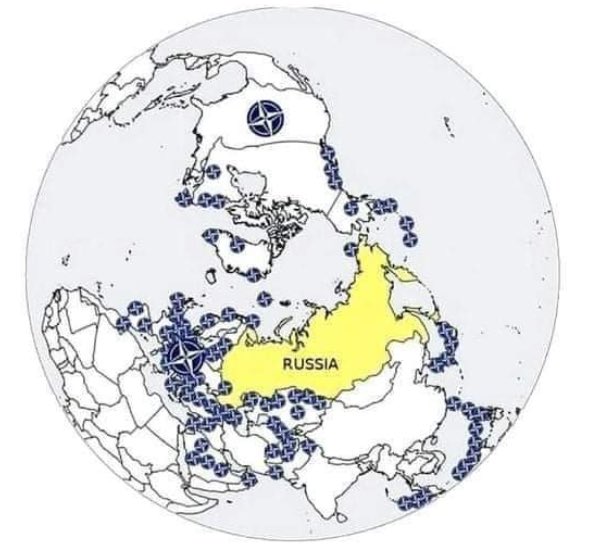 The countries joined NATO voluntarily. (They also freely applied to join.) That’s what sovereign, free states do, they decide their own destiny and don’t let another state dictate anything to them.

Imagine thinking they’re not joining because they’re scared of Russia invading just like with Georgia and Ukraine.

most joined in 1997, fuck, russia tried to at one point. they’ve all wanted to split russia and make themselves stronger, have for a while. I think some are now, but only a few will. Contrary to popular belief, most of the people not in NATO despise it.

I wish that 1997 spirit had been maintained. So many resources and now lives are wasted over the distrust between NATO and Russia.

Fuck that, Im glad the NATO scum have enemies, and I hope the alliance burns to ash. May socialism destroy its enemies. Russia gained little power during this fight, but NATO lost far more. Each are now very much able to be revolted against. Lenin is young again, as the third world rises to burn the 1st.

Suit yourself. I’d rather see a world working together to achieve peace.

if you love the banner of imperialism so much, don’t even try to pretend to care about the rest of the world. Your facade is nothing but patronizing to those you leech off of.

Oh, get off your high horse. Unless you’re willing to decry Russia’s imperialist invasion of Ukraine to steal its territory and install a puppet government?

first deflate your ego before I dismount. Until he does actions able to be described as imperialist, then I will, but as of yet, no. Russia seems to be doing exactly what it said it was, demilitarizing ukraine, De-nazifying ukraine, and taking back lands that voted to go to russia. Until he strays from that, I will not care. Ukraine does not have any special amount of sympathy from me, as the majority of their military and government are filled with fascists or at least ultra-nationalists. Also, defining imperialism as “any military action” makes the word completely useless. Use a more complex dictionary in the future.

Russia internally displaced a quarter of Ukraine’s population and lies its ass off about everything you ticked off, so forgive me if I don’t have any sympathy for it.

Lies its ass off? Who told you that? Have you ever tried primary sources, not sources from media? Ukraine has been killing its own people with its Nazi units since 2014. they’ve been killing in donbass before you even knew ukraine existed. Again, your fake sympathy shines through.

And Oceania has always been in war with Eastasia. !politicalhumor@lemmy.ml would be more fitting for this.