No one considers Pol Pot a communist, but go hard at revealing your obviously propagandized mind.

link
fedilink
@BlackLotus@lemmy.mltoasklemmy@lemmy.ml•Why do I feel like so many people here support the USSR and the CCP?
link
fedilink
22•
edit-2
6 hilabete

Because this place is based and people here can read. Illiteracy is the best weapon of anti-communists because if people can’t read, they often can’t educate themselves that communism is the obviously better system.

Haha some desktop background I saw on here.

It’s Kim Jong Un on a cool looking industrial platform mounted to a hydraulic extender inspecting a reanimated Lenin with a reanimated Karl Marx in the background. The reference is to Juche necromancy, which is used as an internet meme for all the people in the DPRK who are claimed to have been murdered but then they turn up fine. The joke is that they’re being reanimated by juche necromancy.

link
fedilink
@BlackLotus@lemmy.mltoasklemmy@lemmy.ml•Should poverty ever be a defence against a charge of shoplifting?
link
fedilink
7•
edit-2
6 hilabete

Yes, always. Shoplifting from anything but a good worker-owned enterprise is entirely supportable assuming it’s not just like a mom and pop with zero employees other than the mom and pop.

The entire existence of capitalism is tightly coupled with mass worker exploitation through the theft of the surplus value generated by workers.

Edit: I don’t even care if they aren’t in poverty, I still support them, especially from trash like Target. 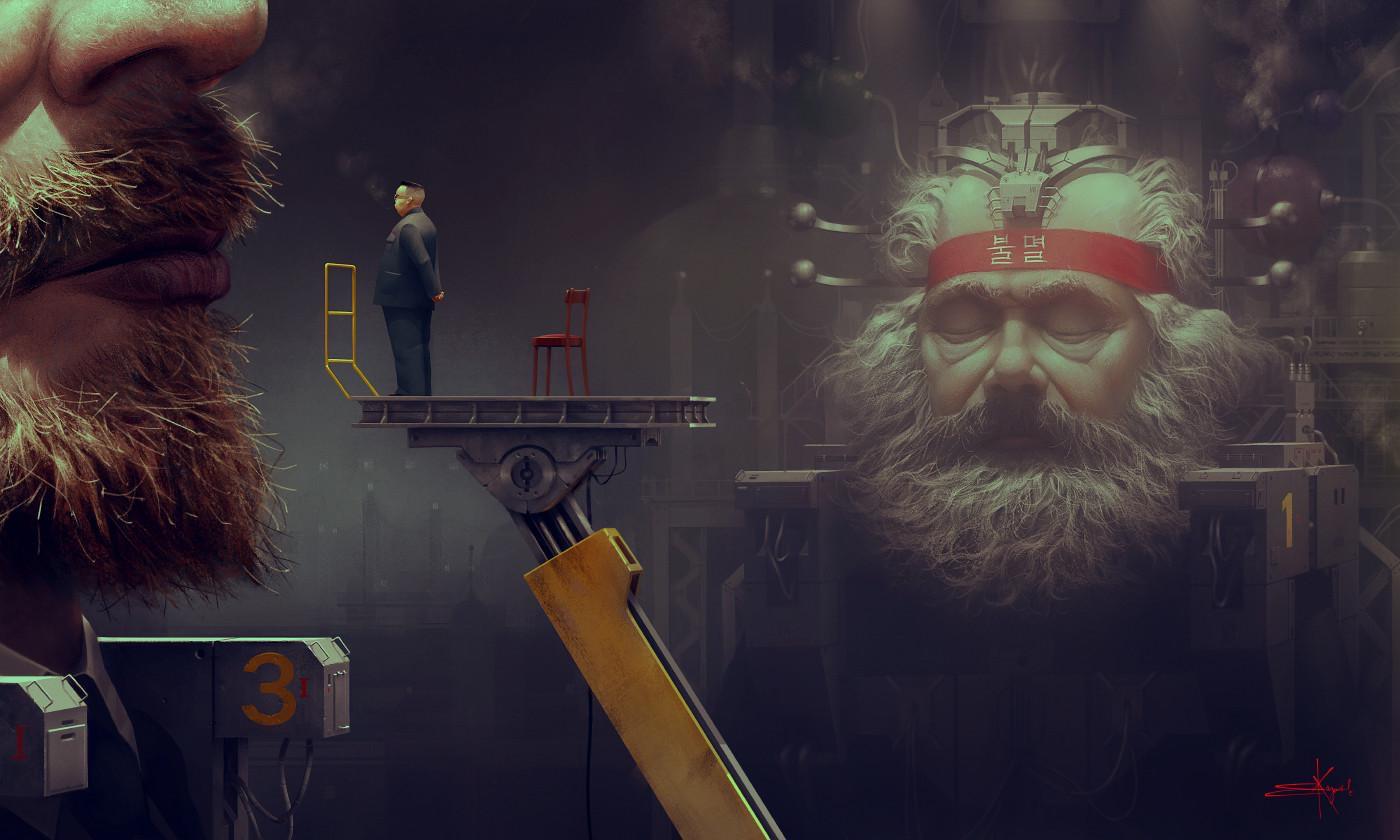 link
fedilink
@BlackLotus@lemmy.mltoasklemmy@lemmy.ml•If you were a dictator, what would you ban?
link
fedilink
1•6 hilabete

Damn, you beat me to it.

The system which enables people to directly exploit others in order to extract surplus value, whether by slavery or wage labor, is the problem, not the individuals compelled to participate.

link
fedilink
@BlackLotus@lemmy.mltoasklemmy@lemmy.ml•When does programming (alone) get cumbersome for you?
link
fedilink
3•6 hilabete

When I’m not doing it to liberate workers from the toil of redundant automation without undermining their acquisition of the means of subsistence. So always.

link
fedilink
@BlackLotus@lemmy.mltoasklemmy@lemmy.ml•What do you think about other lemmy users in general? What about users from certain instances?
link
fedilink
5•6 hilabete

link
fedilink
@BlackLotus@lemmy.mltoasklemmy@lemmy.ml•Is it ‘colonialist’ for the UK to pressure its former colonies to repeal anti-sodomy laws imposed during the period of British rule?
link
fedilink
2•8 hilabete

Stalin was imperfect and made mistakes, but I agree with Deng that he was 70% right and 30% wrong which is worlds better than any liberal democratic leaders in the entire history of the imperial core.

Ha, the “what year you were born?” question is pretty funny. I think it’s probably accurate that many younger people identify websites as “apps,” but software engineers like myself also sometimes do that. It’s just a change in the vocabulary that probably doesn’t propagate to older folks who aren’t in the industry. Although my uncle is in the industry as well, and I think he, too, would balk at the notion of calling this an “app.”

Everything is political. The notion that you can do things and have them not have political consequences and be politically informed is a total falsehood and illusion.

This app is just honest and upfront about its politics, in contrast to something like Reddit which is “apolitical” which just means the admins explicitly support the status quo.

In the deep past. Unless time travel has happened, all you’re doing is muttering about ancient history.

Ok, same argument could be made for someone exploited 10 minutes ago. Stop being obtuse.

Exploitation is still a current problem, the forces of violence used to exploit workers is more abstract, but it’s still present, albeit in less severe form than during the era of slavery.

Which is my point. Supposing that “exploitation” is even a valid concept, then it must be the lesser of the two when compared with violence. So use the stronger argument and say “that was violence”. Not “that was exploitation”.

However, without a good explanation of what exploitation is separate and distinct from violence, it’s not even clear there is such a thing as exploitation.

A lot of words which show you don’t know what you’re talking about. They were both violence AND they were both exploitation. Use your brain.

More so than you, apparently. Like, can you give me a book title, or an author? Without that, your jab’s just a schoolyard taunt.

Marx’s Capital would be a good start. There’s no better analysis of capitalism than that one.

I am educated. I am intelligent, and I’m pointing out that there isn’t some common sense or widely accepted definition of what exploitation is. Everyone talks about it (because it has emotional punch), but without anyone even hinting at what it is.

Exploit: to make use of meanly or unfairly for one’s own advantage

That’s the definition sane people are using with the word exploit. Exploitation is, then, the unfair use of an advantage. In the context of slavery, it was the slavers unfairly using their advantage of being a slaver and having authority to use as much violence as they wanted against the enslaved.

In capitalism, it wasn’t that long ago when the capital owners regularly brutalized their workers. This is even still the case in parts of the world other than the imperial core that I’m sure your pampered ass lives in. Either way, even without the explicit violence of the owning class members, the police are categorically a violent arm of their dictatorship of the bourgeoisie, which is the “democracy” in which you live. Assuming you don’t live in one of the very few dictatorships of the proletariat.

If it is exploitation any time two people of unequal wealth (or power, or whatever) trade, then this disallows all trade effectively, keeping the poor in poverty.

No one said anything about trade, trade isn’t capitalism. Read a book. Capitalism is a system where the capitalists control the capital and the workers must sell their labor in order to obtain the means of subsistence from the owners of capital.

Huh? What is value, other than some arbitrary number assigned to a good or a service, which explains how much demand there is for it? That is, by its nature, subjective. Changing.

Yeah, hence not educated. You clearly went to school, because you are capable of stringing semi-coherent sentences together, but you are uneducated on this topic. Read about political economy by non-bourgeois authors for a change.

You’re clearly insanely biased and you have no concept of material conditions or reality.

I’m done with this conversation. I encourage you to approach again this topic with the humility that you should have. You should not be asserting anything, you should only be asking questions and trying to learn. You are not informed or educated on this topic. The only information you have is insanely biased from bourgeois thinkers who want to keep the working class enslaved.

is in the modern era completely hypothetical.

No, just no. It’s not hypothetical. It’s historical fact that these things happened. You don’t get to hand wave it away because you don’t like it.

Calling that exploitation is rather asinine. Call it violence.

What? It’s both. Slavery was an exploitative system with a higher level of violence than capitalism, but ultimately both rely on immense amounts of violence. After your boss doesn’t pay you your wage, try to get the money for it. Especially if you’re not in the imperial core (US, Europe, etc.) When you can’t, try stealing from his shop to make up the difference and see how the violence of the state immediately comes down hard on you and observe that the violence of the state never came to back you up when your employer stole wages from you.

I believe that at this point your definition for exploitation is circular, and pretty meaningless. It’s exploitation now because it’s always been exploitation before.

Read a book. You’re not educated on this subject, and you sound unintelligible. It is exploitative because the only generation of value comes from the working class. If you were to automate all jobs away such that no worker surplus value could be withdrawn from the system, you end up with a very clear and obvious formula.

The limit as x approaches infinity for the equation of surplus value, referring to the value available in the form of profit to the capitalist, where x is the level of automation is zero. If all the capitalists can produce products with a cost of zero after materials, then (assuming the beloved capitalist competition exists) there will be a race to the bottom on surplus value extraction that ends at roughly zero.

Not only is it “bad” which is a relatively meaningless term in the historical development of economic systems, it’s also inherently unsustainable.

The cyclical nature of the crises of capitalism are directly related to capitalism’s inherent contradictions. They are getting more volatile and more pronounced as the rate of profit continues to fall closer and closer to zero.

As capitalists cut cost by reducing labor hours and wages, fewer people can purchase their goods (on the whole, this does not apply to every industry at every time, but the vast majority of industries are affected in this way.) This cycle leads to mass unemployment every 7-10 years, more or less.

If two parties each have something the other wants, and they agree to the transaction, where is the exploitation?

If a freed slave opts to stay working for their previous master because it’s all the slave knows, this is still exploitation.

This analogy extends to capitalism. If someone who only knows the exploitative relationships between worker and capitalist, and therefore opts to maintain the status quo, it does not change the reality that exploitation is inherent to the relationship.

link
fedilink
@BlackLotus@lemmy.mltoasklemmy@lemmy.ml•Why so many commies in this app?
link
fedilink
8•urte bat

link
fedilink
@BlackLotus@lemmy.mltoasklemmy@lemmy.ml•What was supposed to be "The Next Big Thing", but totally flopped?
link
fedilink
0•urte bat

Improving USAmerikkka wasn’t even the intention anyway. It was just improving the lives of white people, mostly just rich white people, with a few crumbs and a lot of racist thinking handed down to the poor white people.

What are your favorite leftist podcasts?

What are your favorite leftist podcasts?