So if an admin deletes a post that originated on their instance that post will still exist on other instances? what about in communities?

several and performance varies room to room. Can you recommend a fast server?

where did I mention the age of an issue?

So on that classifications comment it’s me not caring about calling a concept something vs discussing what something is already understood as a concept. There is a concept of what federation is, and that is represented in existing federated platforms like lemmy, matrix and so on. In that concept I see stupid things but it’s not all the same nor all of the concept stupid.

So storage on discussions.app is currently using open blockchains. So its the blockchain that is responsible for what is there, while they are only using that for text, blockchains have had childporn put on them. It is next to impossible to remove data from a blockchain. So that is an issue. I think the data would be better stored in something like ipfs. This type of platform relies on the backend for its distributedness, like with a blockchain. Anyone who can access the backend can be part of the platform.

Yes the blacklists would result in a federation of sorts. I think the idea you store and distribute mainly content you use is a good one. The data has to be somewhat unfiltered for the model to work and in that part you will potentially be distributing content you may not want to. Though the situation would be some what a kin to putting encrypted content say here that people wouldn’t like except for the fact they cant know that.

or Matrix could just solve p2p really well. The matrix.org situation has been mentioned by the p2p dev as motivation for p2p. The side benefit is matrix p2p solutions should work for other projects.

What censorship evasion are you refering to with Matrix internal or external?

Signal’s centralization is a huge weak point proven with the servers crash a while back.

Wanting decentralized tech is more a libertarian vs authoritarian thing than left and right. I really dont want to pull politic politics into this though cause the tech politics alone is enough :-)

Everyone who disagrees with the rules can talk to the admins, they’re humans. if you don’t agree with it, leave and find an instance that fits you. you’d still be able to access content all around fediverse.

Are you saying content censored in one instance still persists on others here?

I think the admin model can be done much better.

I like what you are saying with openid but without caching or duplication the network scales poorly and content can go missing.

its gone into the ‘fediverse’

Its a difficult concept to get, one because it has yet to really exist in any meaningful way, like with a platform with say 50k or more users and because of the terminology used. Moderation is a bad describer of it except it has much the same use and effect but with differences. It would be better described as ‘filters’. Filters would also be a good describer for what are block and white lists.

I dont particularly care on classifications, its just like different languages to me. To use your list its all 3, the instance can implement a central control but uses can switch instance and have the same content, or the instance may allow their control to be altered, like disabled or changed. Users can use lists made by others, to which they may as well help in making and users may also have their own lists. The concept should expand to include multiple lists block and white working against each other in priorities, and the lists work against not just users but any individual piece of content and it could and should I think be expanded to include editorial changes, annotations. Things like rather than hiding content pointing out problems with it, grassroots factchecking etc. To me its an incredibly adaptive and dynamic concept, which must be hard to implement or surely someone whould have tried long ago.

what is the power of the mods?

Currently on discussions.app content and users can only be hidden, the instance or interface has some moderators as fixed defaults for doing this but previously and the same I am told will occur soon is logged in users may unselect any of these moderators or add their own, and currently you can do your own moderation. Moderators can also be in control of a community and so using that community will use that moderation. The idea is all moderation is done on a consensual basis with each user, the platform then becomes individualized for each user. Rather than looking for instances you will just look for the communities and more so in the future the moderators. The simplest way would be you grow a follow list similar to your moderator list, but hopefully those lists become tradable at some point.

Sorry for the long text. In short user controlled and collaborated and sharable filter lists is what I am talking about.

irrelevant metric? that’s an interesting reality you have going there, watch you don’t step outside cause it might break. You give no proof to your claims unlike I did. Looking at the list many of the unticked features have already been implemented, maybe most of them. I could go through one by and one with proof but won’t bother as you clearly have not either.

exactly, and the company behind element already surprisingly seems quite financially successful so I doubt this much money will change things massively.

This is also all with the support of the core people behind matrix and element, so if anything was nefarious it would be stuffed either way as the team would be corrupt.

Money is good as a function of our economy, but the issue you point out is concerning. It really depends on the conditions attached to the funding, like will it compromise the project somehow. The funding is just as likely to be from an intelligence agencies VC arm to alter the code for their benefit. I have seen mentions that Matrix is being used now in things that “can’t” be mentioned. Ideally open source should be able to circumvent such interference but not easily I think.

and it was last edited 2.5 years ago, element has surely changed a lot since then. 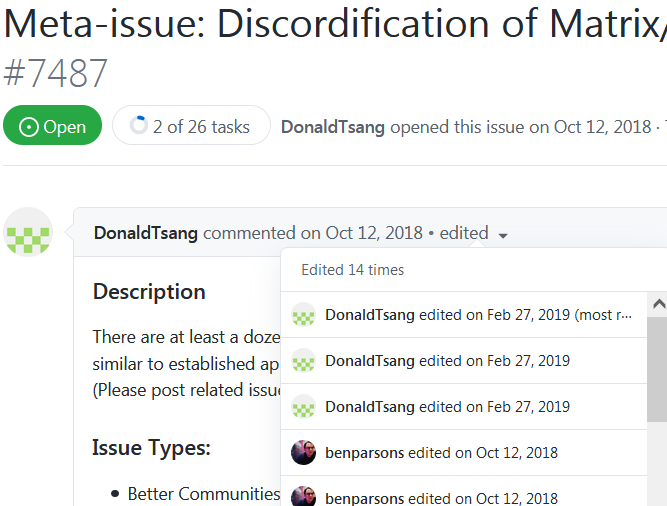 Moderators are globally set just on that one instance (or really it’s an interface or frontend), but also changeable by the users but also depending how the instance is setup. The way they are doing the data it is all shared in blockchains so in that sense it is a blob, but depending on each user and how they have that content curated would change the interactions user to user. In theory you will have groups oblivious to other groups but users within them that cross over between and become social bridges. The network is the people. My idea is that these human bridges will eventually lower barriers between users blocking each other and change minds. The end result is a more connected less divided social platform and so too society. Following the axiom that communication solves all problems. By putting the barriers to communication into the users hands instead of third parties he will have control to remove them.

Yes matrix’s new slim dendrite server is being worked on with the intention for it to be used in p2p. I get there is many possible implementations of federation and I am totally down to take on ‘big tech’ it’s just to do that I think you not only need to match them but bring something better and I am not entirely seeing that yet. In fact I am even seeing subpar things like discoverablity, fragmentation, performance, complications like to all the rules and instances.

Federation is stupid convince me otherwise.

Genuine inquiry . Maybe I am not experienced enough with the various federated platforms but I am an avid user of matrix, and have dabbled in lemmy. From what I have seen is federation is on the path to decentralization but not fully there. It creates fiefdom, little kingdoms . Great yes you may find one that suites you better, but users now can end up isolated to their island, switch island sure but now you are isolated for the previous island and maybe others. Its stupid. On matrix you need to know the other island(server) to even find its rooms(communities). Some rooms block users from one server while others block users of other servers. You either have to run multiple accounts or accept the limits. Add in you are at the mercy of your home server, you can lose your account have it immitated, and more. The performance is horrible not sure why, but content is slow to update and spread. Matrix has the problem because of its design most people are on the matrix.org server and so the point of federation is largely lost. They are moving to p2p where it seems the solutions for federation now dont apply. Anyway why is federation not stupid? Are these problems only with Matrix? Cause I look at lemmy and it seems far worse.
fedilink
12
message-square

Federation is stupid convince me otherwise.

How does federation work here and what is the point?

I can't see how users can interact across servers? On matrix I just join the room homed on another server but here how? It seems like there are lemmy servers out there with no federation at all? Overall I am not impressed.
fedilink
9
message-square

How does federation work here and what is the point?