Jack Dorsey regrets his role in creating a centralized internet

Jack Dorsey regrets his role in creating a centralized internet

Whoa, he has some ability to realize what he has taken part in creating.

“The days of Usenet, IRC, the web… even email (with PGP)… were amazing,” Dorsey said on Saturday in a tweet spotted by Mashable. “Centralizing discovery and identity into corporations really damaged the internet. I realize I’m partially to blame, and regret it.”

I realize I’m partially to blame, and regret it.

Then open source the code behind twitter, remove barriers to decentralization, encourage self hosting of twitter instances by making it easy for even normies to achieve. Twitter has the funds and ability to achieve this. Put up or shut the fuck up, Jack.

It’s just like all the capitalists virtue signaling about Basic Income when literally no one would work for their shit companies if there was a basic income.

It absolutely would improve working conditions, competition, and innovation. Right now everything is up to the whims of the capitalists and so there is no free market.

My point is these oligarchs like to pretend they are for basic income when basic income would completely obviate their shit business models and wipe them out.

The whole thing with Twitter and fediverse is the same. He can pretend he is for fediverse all he wants but Twitter would have no reason to exist at that point.

First, shake all possibility of making an actual difference, then start criticizing from the comfort of your $100 million living room or whatever. Terribly convenient and safe.

It’s certainly possible that that was the order of things, but given that Twitter started out somewhat more idealistic and open, I wouldn’t be surprised if as soon as the financial ties and responsibilities toward Twitter fell away, he had a chance to look around at the state of the internet and feel genuine remorse.

Fuck him regardless, but I don’t think he necessarily planned it to be this way. It’s reasonably likely that we’re watching a monster finally start to process how much harm they’ve caused the world.

Well, maybe he should do something about it then. Donate to open source projects maybe?

Yeah, they’re allegedly working on a decentralised product, but they won’t say “ActivityPub”

Seems like they want to decentralise the web, but still centralise control over the federation protocol

It’s going to be blockchain. I’ll bet money on it being goddamn blockchain

While this redefining of the term is happening, that isn’t what’s meant here. 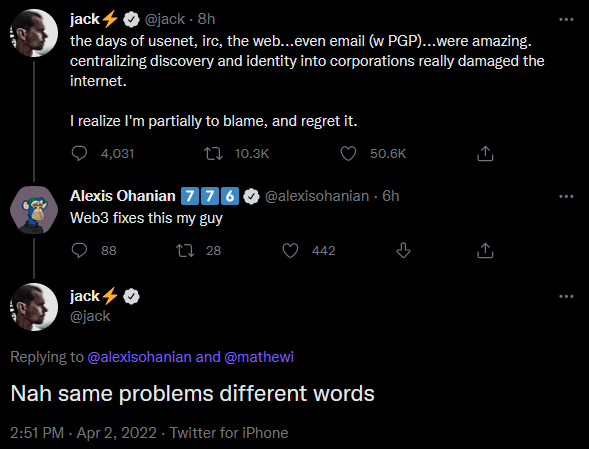 Of course Alexis with his hideous monkey hexagon icon is the one to say that.

There absolutely needs to be a way to take that stuff down, otherwise you’ve basically created a buffet for the monsters that enjoy that stuff, because they’ll know that once uploaded it can never be removed and the address to access it can’t even be changed.

Also, since possessing such materials is illegal in the vast majority of places (as it should be), wouldn’t that mean that the instant such content gets uploaded to the blockchain, everyone storing that blockchain is committing a very serious crime?

I’ve never seen a serious attempt to address this problem, but it absolutely needs to be addressed! What I have seen though, are blockchain fans implying that they don’t want that stuff to be illegal when on a blockchain for the sake of keeping the blockchain intact, which, no, I absolutely disagree with that. Gross.

From my understanding, they don’t put the content itself on the blockchain but a plaintext permalink. I could be wrong, but since every decentralized node has a full copy of everything on the blockchain it’s only feasible to have tiny bits of text.

So then what’s the point of using a blockchain then? That just sounds like a normal website with extra steps.

That’s exactly it. But you also have to buy our special token and or cryptocurrency.

@AgreeableLandscape @JoeBidet there is no way to take anything down without forking the blockchain. i think that every blockchain is illegal in some way

Better is a question of definition 😅 I think he has a self image of being pretty libertarian, which is not always backed up by what he actually does as a business man, but he is rich enough to retire and work on a libertarian pet project in the future.

Is that going to be good? Who knows. But probably “better” than Twitter.

Hmm I am not optimistic it’s going to be better than Twitter.

They are working on it: https://techcrunch.com/2021/01/15/twitters-vision-of-decentralization-could-also-be-the-far-rights-internet-endgame/

But I doubt it will be just AP compatible out of the box.

This sounds to me like they are building a competitor to Mastodon and Activitypub. One thats under their control (or rather, their investors).

“The tech executive turned data justice warrior is celebrated as a truth-telling hero, but there’s something a bit too smooth about this narrative arc.” – Maria Farrell, March 5, 2020

We really ought to be encouraging these sort of admissions instead of deriding and to get these people to do the right things from now on.

No. He is EXTREMELY influential in the tech field. The fact that he’s talking about it while expressing no intentions to actually do anything about it makes it clear that he doesn’t actually give a shit. Words are cheap and easy, but they alone also accomplish nothing.

There are a lot of ongoing efforts to decentralize the internet (that aren’t blockchain buzzword salad). Fediverse, P2P, BitTorrent, etc. Not to mention that Usenet is still alive. He should put his money and effort where his mouth is if he actually regrets it.

He knew what he’d been taking part in this whole time but waited till his time card was punched and his millions made before admitting it. Too little, too late.

At least he is a consistent person unlike other people

Subscribe to see more stories about technology on your homepage